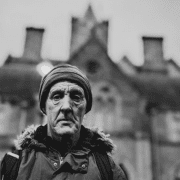 Liam’s story is filled with pain, but it’s a story he wanted to share. The generosity of our supporters has allowed Liam to rebuild his life.

‘Once upon a time I had a happy life. When I was a small boy I lived with my Ma & Da and my big brother in Ringsend. We had a great childhood with summers spent around the river and messing with all the local lads.

But our world changed forever when my Da died in a work accident.

Ma really struggled to look after me and my brother, everything was tight – money, food and the clothes we kept growing out of. She met a fella and they got married but he had no time for us kids.

It went from bad to worse, he hit all of us all the time, told us we were useless every day and eventually I just couldn’t take it anymore.’

As soon as Liam could he left the unhappy home and ended up fending for himself at the very young age of 15.

‘I muddled through life for a few years and was able to hold down a job, I felt my slide into homelessness was a gradual thing. Everything went into a spiral, I felt worthless’ he says.

‘I started to drink more heavily trying to cope with the loneliness. I felt so unloved and couldn’t face seeing my brother or my Ma again – the memories were just too painful. I got let go, I had no money and I ended up on the streets.’

‘You don’t want to think about Christmases you spent with your family before it all fell apart; it just twists your guts inside. I have the best memories of Christmas with my Ma & Da – we didn’t have much in the way of presents and Santa but we had so much love. I know I’ve never felt love since.’

‘You wish people a happy Christmas and you genuinely mean it, because you can’t have one yourself.’

Incredibly, Liam considers himself lucky – because he was only on the streets for a few years. ‘Some people have been there much longer and are even afraid to accept help’ he says.

‘Those years were like hell for me. Not knowing what to do, where to go, how to spend the day. I just relived the abuse I suffered as a young boy over and over in my head. I missed my Ma.’

‘One day I started asking around the streets “who was going to help?”

The answer was Dublin Simon.

‘Homelessness is much more than not having a roof over your head,’ Liam says.

‘Homelessness is when you no longer have the love of a family. You don’t even have a friend.’

For Liam, the grinding, constant loneliness was the hardest thing.

‘You’re invisible when you’re on the streets. Nobody sees you. Nobody knows you’re there.’

Thanks to Dublin Simon Community, Liam was able to get his life back on track.

‘Simon want to know who you are,’ Liam says. ‘They don’t want you to be the invisible guy. Through Dublin Simon you helped me to put everything back together again that had been smashed to pieces.’

‘The respect for yourself that you lose, the dignity as a person that you lose. Through Dublin Simon you gradually get it back a little bit at a time.’

By donating to Dublin Simon Community, you can help save more people like Liam struggling with homelessness.

‘The amount of lives you have saved is incredible, mine included,’ says Liam.