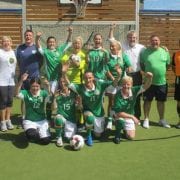 The organisers of the Homeless World Cup say that the event is not just a competition, but a social movement that uses football to inspire people who are or have experienced homelessness and help them change their lives. The event will be taking place from August 29th until September 5th at the Rådhusplassen, The City Hall Square in Oslo. This is the 15th annual competition among 73 countries that implement street football programmes for men and women on the margins of their societies.

Ireland has been a national partner of the cup ever since its founding, and Colin Farrell its celebrity ambassador. Tara impressed Ireland’s scouts in a competitive selection process where the most talented players are chosen to represent Ireland in August.

Tara said that ever since she was young she dreamed of becoming a professional player. At the age of 18 she applied for FAI (Football Association of Ireland) course, however, shortly after, the circumstances left Tara with addiction issues and facing homelessness. Since then Tara felt regretful about the missed opportunity and a passion that never became a career:

“Football has always made me feel free and clear-minded. I always knew I would’ve been a good player, but up until my time with Dublin Simon Community, I have never had a chance to become a part of it. I thought that you can only play football until a certain age, and then you’re done. I never thought that, with everything I went through, there was going to be another chance to do what I love most.”

Trials for the World Cup have been physically and mentally challenging. After being invited to the trials by several coaches, Tara declined, thinking that she wasn’t mentally prepared and that the timing just wasn’t right. After several phone calls from scouts and coaches, she decided to participate in trials where she was selected out of a great number of competitors to play alongside three other women.

“Training for the World Cup was a 2-hour intense training every Saturday morning. We’re still responsible for keeping fit with the help of a healthy diet and our usual weekly training. If it wasn’t for the gym and other facilities that the Dublin Simon Community provides, I don’t know if I would’ve been able to keep fit through it all. It’s not just the training that I’m benefitting from; most of my support comes from my trainer Niall. He was the first person I rang when I heard that I got into the team.”

Tara says she also relies on the support of her family. Her son takes after her when it comes to sport, and her elder brother was the reason she got into football in the first place.

“When they rang me to pick a jersey number, I immediately picked number 2. It was my brother’s number, and he was the biggest reason I got into football. I told him that I was accepted into the team that afternoon. It was so nice to be able to give them a piece of amazing news after all these years. He was thrilled.”

Even though self-doubt ‘kicks-in’ sometimes, Tara says that she always gets back on her feet after a single training session in the Dublin Simon Community’s gym. With everything that has happened since she was 18, this all seemed dream-like. That’s why her message to everyone is: “Never give up on that big dream you have. There’s always someone who can see how good you are, and there’s always someone who’s going to push you to achieve your dreams. I’m thankful for those in my life who did that for me.”

Keep up to date with all of the latest World Cup news and results here.