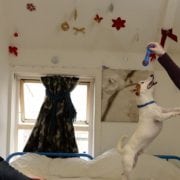 Read Patrick Freyne’s recent piece for The Irish Times below.

Many people offset the pain of homelessness by keeping a pet – mostly dogs, but also cats, rabbits, and an iguana.

Pets offer comfort, security and companionship to people who are on the streets but they can also make it difficult for them to find accommodation.

A year ago Mary Kelly was sitting by her tent in an old mill in Phibsborough when a man named Spud jumped over the wall. “Don’t mind me,” he said. “I’m only having a smoke.”

“Work away,” said Mary. “Just clean up and no fires.” Mary has a terrible fear of fire. She lost close relatives in the halting site fire in Carrickmines and her tent had been maliciously burned in the past.

Spud had his smoke, Mary says, “and as he was leaving, he said ‘Do you want a dog?’ I said ‘Yeah! But not a big shaped dog, a nice normal dog.’”

A week later, Mary and her fiancé Paulie Maughan were sitting in their tent (there’s very little to do, she says, when you’re homeless and trying to steer clear of heroin) when a little face poked in. It was a Jack Russell named Scooter and Spud was behind him. “He just jumped right up and into my lap and licked my face. I said, ‘Alright Spud, I’ll have him, thanks.’”

Scooter is thirteen months old now and as we talk he’s sitting at my feet, chewing my boot. “We think he’s still teething,” says Paulie. Paulie and Mary love Scooter. “He’s my baby,” says Mary. “Who wants Sudocrem on his belly?” Scooter flips over on to his back in anticipation.

Many homeless people have pets, says Dublin Simon’s senior manager for emergency services, Claire McSweeney. It’s usually dogs, she says, but she knows of a few rabbits and one iguana.

Stephanie Lordan, a Simon Community outreach worker, tells me about an older man who lives in the Phoenix Park with several cats. “It’s like a Disney film sometimes,” says Lordan. “There are deer there too.”

Back in 2014, with engagement from the Dogs Trust, Dublin Simon started offering a limited number of emergency beds to pet owners, because people who loved their animals were losing housing opportunities rather than leave them behind.

“They get their dogs for companionship and protection,” says McSweeney. “They don’t leave the dog for a second. They’re not going into work and leaving it at home. They look after their animals very well. They have a deep bond. They trust them more than anyone.”

Mary, Paulie and Scooter have been in supported temporary accommodation with Dublin Simon on Harcourt Street for two months and have, more recently, been offered a permanent ground floor flat with a garden through the Housing First scheme (overseen by the Peter McVerry Trust and Focus Ireland).

Scooter is a distinctive looking dog. He has none of the brown markings around the eyes that are typical of Jack Russells. “He should be a model,” says Mary and she laughs.