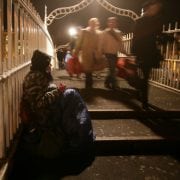 On the night of the count, 22 November, 142 people were identified as sleeping rough across the four local authorities of the Dublin Region. This compares with 91 in the 2015 winter count and 102 found during the 2016 spring count.

In reaction to the figures Sam McGuinness on behalf of Dublin Simon Community said;

“The latest figures represent a 56% increase since winter 2015. It must be emphasised that this the minimum figure, as it doesn’t include the 77 people accessing the Night Café on Merchants Quay, which would equate to 219 having no bed on the night of 22 November. Nor does it include the hidden homeless who are concealed and unseen in nooks across the city.

“Within a small central area of the inner city, the Dublin Simon Community Rough Sleeper Team conduct our own rough sleeper counts twice a week. Over the past number of months, we have been counting record levels of people bedding down in this narrow catchment area alone. On 20 September we recorded our highest figure this year at 168. This was followed by 164 on 04 October and 162 on 18 November. Again, this does not take into account the approx. 70 plus people who are without a bed in the Night Café.

“These figures highlight the necessity for the opening of the 230 extra emergency beds in December, as announced by Minster Coveney, in order to get people off the streets this winter and into a secure, safe bed space each night.”